“Gold is Money and nothing else” – J.P. Morgan

Gold is a chemical element (AU) that humans used for monetary exchange, wealth, and trade for thousands of years. Be sure to check out these unique facts about gold because you will be shocked to find out how important this precious little metal really is to us and our planet.

Throughout history no paper currency has survived in its original form. Paper currencies are normally inflated away until they are worthless. The purchasing power of the US dollar has declined by 90% since 1950. 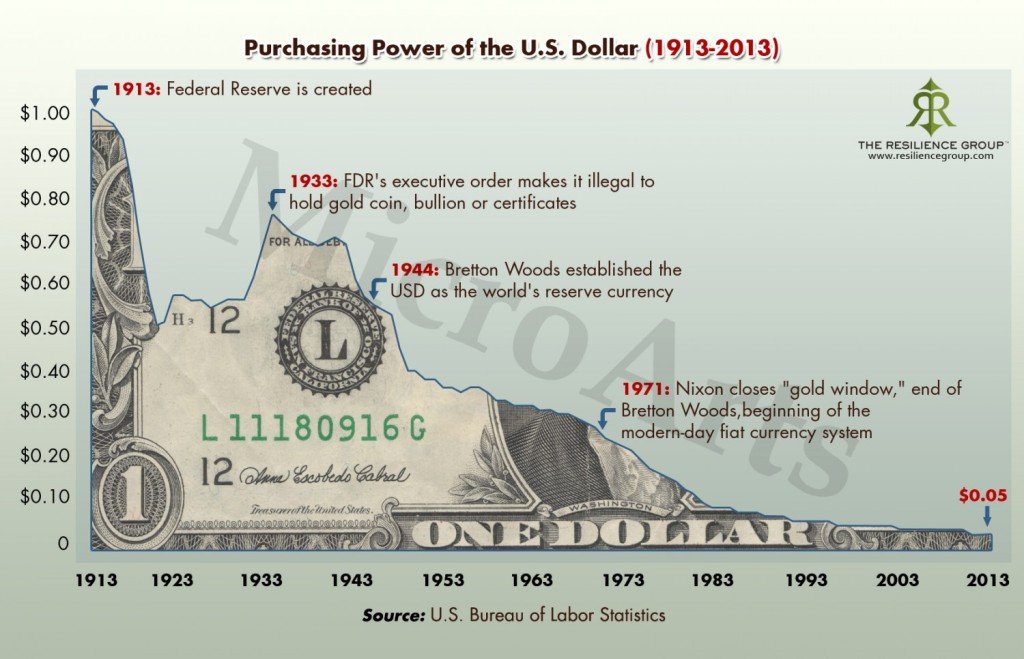 The situation is the same for most currencies. When governments come under financial pressure they can never resist printing money to pay for debts, be they war debts or just excessive spending.

Gold is the only currency which has no liability attached to it.

So far no paper currency has survived intact over a longer period whilst gold has represented real money for several thousand years.

When paper money fails, investors who own gold still have a currency which holds its value despite the fact that banks may be bankrupt.

Gold has at all times represented real wealth as well as being a medium of exchange. “Old money” has always maintained a percentage of its wealth in gold since the specific characteristics of gold make it probably the safest and most attractive investment for storing and preserving wealth.

Gold stored outside the banking system should be the foundation of the wealth pyramid for high net worth individuals. Therefore, physical gold or silver should not be considered as an asset which is valued or traded on a daily basis.

Over time gold has represented an excellent investment that holds it value in real terms. In particular, gold appreciates during periods of high inflation and financial instability. As there is limited supply of gold it cannot be printed to finance the deficit spending of governments.

Gold can act as a critical hedge both against inflation and a deflationary financial collapse.

The world is currently facing a crisis of unprecedented proportions. The financial system is fighting for survival and has been temporarily rescued by governments printing unlimited amounts of money.

There are only two possible consequences of these actions:

Both of these outcomes will be extremely bullish for gold which always benefits from money printing and high inflation.

In the Weimar Republic in the early 1920’s gold went from DMark 100 per ounce to Dmark 100 trillion.In the case of a deflationary collapse, many or perhaps most banks will fail whilst gold (stored outside the banking system) will be the only safe money.

The total value of all gold produced in 2013 was around $100 billion. Compared to total investment market of around $150 trillion, the gold market is miniscule. A slight reallocation of investments into the gold market would make the gold price soar. Gold production is stagnant and there are no major mines coming on stream. In addition central banks and bullion banks now have very low stocks of physical gold. This limits their ability to manipulate gold in the paper market. As investors realise that sellers of paper gold will not be able to deliver physical gold, their will be panic buying of physical at much higher prices.

Like most investments gold moves in cycles. Although the long term trend has been rising strongly, there are times when gold spends long periods correcting previous rises. In the long term gold has been keeping pace with stock markets but at certain times it outperforms substantially. Since the bottom of gold in 1999, the Dow Jones has declined 83% against gold. Other stock markets show a similar substantial under-performance in relation to gold in the last nine years.

[2014] Since 2001 gold has had an outstanding performance with a total returns of 300-500% depending on the base currency of the investor. A US dollar investment in gold in 2001 would have yielded 350% or nearly 13% compound annual return. For a Euro investor the return would have been over 200% total since 2001 or nearly 10% compound annual return. In spite of the 5 week spike top in 2011 these are outstanding long term returns outperforming most other investments during the same period.

Gold tends to move in cycles of at least 12 to over 20 years and should therefore continue to increase in value substantially for another few years at least. But gold should not be measured on a daily basis. Instead it should be considered as a long-term core holding representing the foundation of the wealth pyramid.